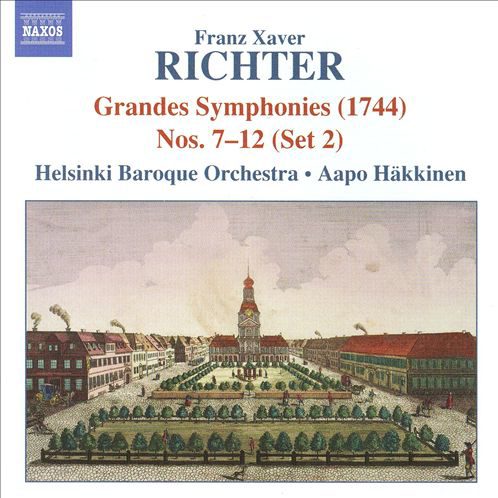 When Naxos released the first disc of two in its series devoted to Allan Badley‘s edition of Franz Xaver Richter‘s Grandes Symphonies of 1744, featuring Aapo Häkkinen and the Helsinki Baroque Orchestra, it was predicted that if the follow-up was anywhere near as interesting as this first volume that it would be, by its very nature, self-recommending. The second Naxos disc, Franz Xaver Richter: Grandes Symphonies Nos. 7-12 (Set 2), has arrived, not only fulfilling that prophecy but in some ways exceeding its promise. The later symphonies in the set are vibrant, extremely dramatic, and rife with bold contrasts; especially extraordinary when one considers that when they first appeared in print in 1744 the Baroque era was not quite done and the symphony still officially functioned as an opera overture. Perhaps that’s what Richter had in mind when he titled his set of 12 « Grande Symphonies, » meaning something substantially larger than the typical Baroque sinfonia, and whereas the first disc was a startling testament to Richter‘s originality and forward influence, this one definitively establishes his centrality to the earliest symphonic literature.

The opening Allegro of the Sinfonia VII in C major manages to seamlessly wind together a rude, stomping rhythmic figure with a purely orchestral idea that suggests a diaphanous piece of fabric floating in the breeze; the Largo and Presto of the Sinfonia VIII in B flat are carefully terraced — and highly chromatic — contrapuntal structures that nearly manage to avoid explicit thematic statements altogether. In this sense, Richter dates himself a little as his music is not particularly dependent on style galant and emphasizes the contrapuntal rigor of the past, yet his clarity of texture and formal plan are something new; the music is never busy and is full of little shocks and surprises. The minuet that concludes the Sinfonia XII in C major is so bent up and quirky it almost sounds like a postmodern gloss on a minuet. The opening « Spiritoso » of the Sinfonia in G minor is stunning; not Sturm and Dräng (G minor was a favored Sturm and Dräng key in the later eighteenth century) so much as resolutely grim, laden with tragedy, and employing a strikingly secure use of negative space. Despite the high level of inspiration apparent in this music, Richter was still working out some of the formal kinks of the symphony; after the G minor « Spiritoso » is followed by a luscious Andante, largely featuring a solo violin, the 14-minute piece is wrapped up with a throwaway Presto that lasts less than a minute and hardly seems like an ending. For Richter this would have been the price paid for such a long and elaborate first movement; clearly for the symphony to grow and true balance to be achieved, symphonies would need to be longer. Even taking that into consideration, it’s still pretty startling to consider that such intrepid and adventurous symphonies could have been written when Franz Joseph Haydn was only 12 years old; if we didn’t know that Giovanni Sammartini had been there just a little bit before, we’d almost have to call Richter « the father of the symphony, » a huge historical adjustment. For anyone who cares about eighteenth century symphony, Naxos disc Franz Xaver Richter: Grandes Symphonies Nos. 7-12 (Set 2) will be a must, but this first class symphonic music should appeal to a broad swath of listeners owing to its moments of excitement and beauty, vibrant orchestral color, originality, and visionary spirit.
AllMusic