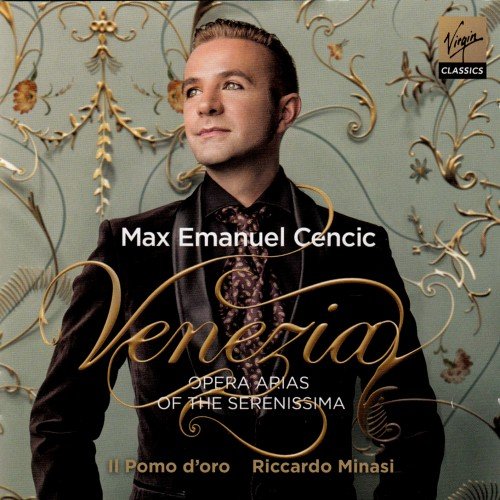 The “Serenissima” referred to in the title of this release is the Republic of Venice itself, La Serenissima Repubblica di Venezia, as it was known in Vivaldi‘s time and would be until its fall early in the Napoleonic era. Croatian countertenor Max Emanual Cencic gets some nice shots in the graphics, but no biographical information about either him or the curiously named orchestra Il Pomo d’oro underRiccardo Minasi is included. Instead, the intent seems to be to present some lesser-known Venetian operas from during and slightly before Vivaldi. The earliest composers included are Albinoni andVivaldi‘s teacher Francesco Gasparini. These are for the most part not the displays of vocal athleticism that would come with Handel and Italian opera seria; they’re more melodic arias that are well suited to Cencic‘s voice, which has a bit of gravel and a nice dramatic flair. Those who delve into the booklet will get lots of information on Venetian theaters and the like, which gives the impression thatMinasi‘s forces here are very close to what would have been used at the time. Minasi‘s accompaniments are a bit less intense than those offered by Diego Fasolis and I Barocchisti in an earlier recording with Cencic, but they fit the predominantly romantic (not tragic) texts, and overall the effect is pleasing in music that will be unknown to all but serious Baroque opera fans. Not so pleasing is the sound from Virgin Classics, which gets you too close to the orchestral soloists.
AllMusic