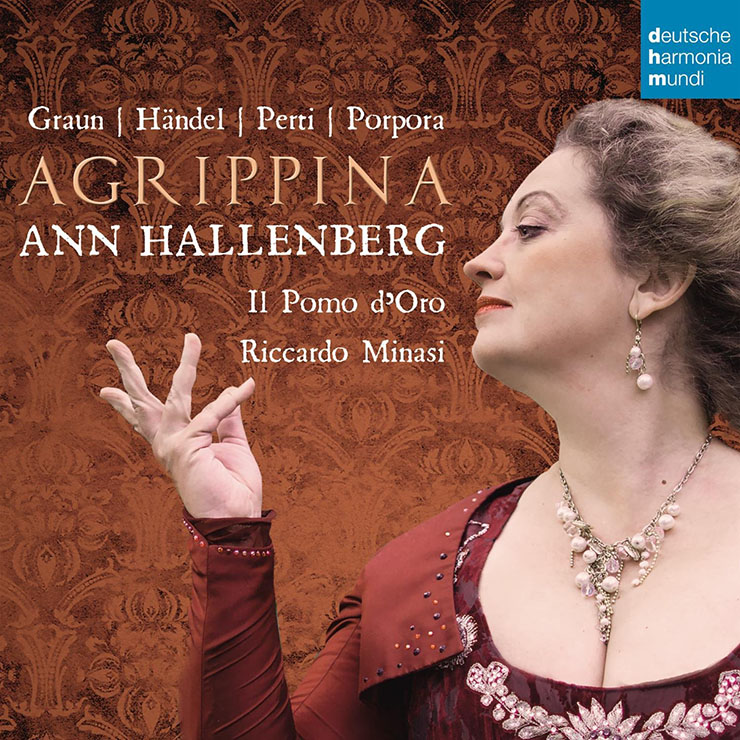 winner of the International Opera Award 2016

This rewarding album is the result of Ann Hallenberg’s investigations into ancient Roman history. Not one, but three Agrippinas are mustered here. Two of them are daughters from two of three marriages of consul Marcus Vipsanius Agrippa, while the third and best known was the infamous daughter of the younger of the above-mentioned, sister of Caligula and mother of Nero. She gets the lion’s share of the music – not the happiest figure of speech, perhaps in this period of Roman history – with arias by six of the ten composers featured in Hallenberg’s recital. Most of the music is new to disc, though keen followers of Italian opera seria may have encountered Telemann’s ‘Rimembranza crudel’ from Germanicus, and many will recognise the three chosen arias from Handel’s early opera Agrippina. Especially alluring is ‘Ogni vento’ in waltz metre, though the instrumental accompaniment is insufficiently light-footed. Among other delights are pieces by Handel’s gifted Italian contemporary Porpora and two generously proportioned arias from Britannico by Frederick the Great’s Kapellmeister, Carl Heinrich Graun. Hallenberg is on scintillating form, fluent alike in bravura, of which Graun’s ‘Mi paventi’ with horns provides a dazzling example, and cantilena. The instrumental support provided by Il Pomo d’Oro under its director Riccardo Minasi is generally crisp and alert with fine contributions from the oboes.
Nicholas Anderson – BBC Music Magazine

The singular Agrippina named in the title of this release is actually three women by that name, all related. The most famous is Julia Agrippina, the daughter of the Roman general Germanicus and the mother of Nero, but the lives of her mother and aunt also furnished rich material for Baroque operatic librettists. It’s commonplace to observe that Baroque audiences knew the history of ancient Rome in a way that’s hard to imagine today, but it has not been so common to translate this wisdom into an album programming concept, and that’s just what mezzo-soprano Ann Hallenberg and her husband, musicologist Holger Schmitt-Hallenberg, accomplish here, with the latter unearthing a host of virtually unknown Agrippina arias. The most famous Agrippina is Handel‘s, composed in 1709 and the highlight of his sojourn in Italy. It is well represented here, and its representation of its scheming heroine would have been known to many Baroque audiences. But compare Handel‘s treatment of Julia Agrippina with that of Giuseppe Orlandini in his forgotten Nerone (sample track six): her over the top rage is treated differently by each composer here, and comparing them is just what an audience of the 18th century would have done. Hallenberg has the dramatic chops to take on these temperamentally extreme figures, and she receives punchy support from the historical-instrument ensemble Il Pomo d’Oro and director Riccardo Minasi. Her voice is remarkably consistent in tone across its registers. The sound is too close up, but in general this is a good choice for lovers of Baroque opera who want to explore how audiences of the period would have experienced it.
AllMusic