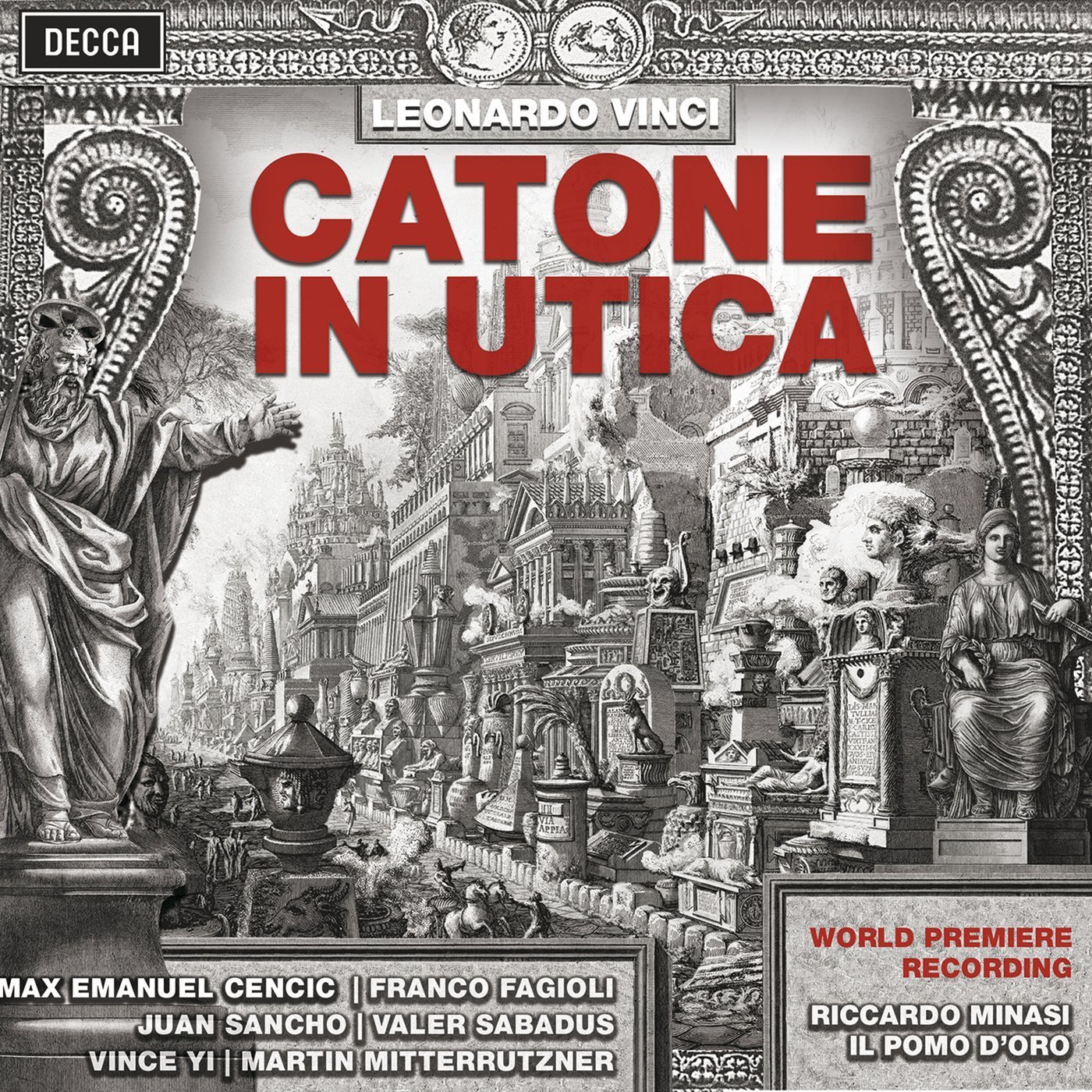 . . . [the recording] is a stunner . . . Cencic’s dark, warm voice is extraordinarily beautiful, and the quiet intensity of his singing, all deep feeling and rapturously sustained lines, admirably suggests a man whose emotional sincerity is compounded with innate moral fibre . . . The playing, all suave strings, fiery brass and rich woodwind, is tremendous in both finesse and enthusiasm, and throughout they generate that crackle of electricity . . . and you understand completely why they have become today’s “period” ensemble of choice for Italian Baroque. An outstanding recording of a remarkable work, with complete text and translations provided, and highly recommended.
Record Review / Tim Ashley, Classicalsource.com / 06. June 2015

. . . [the role of Cesare] is sung and projected by Franco Fagioli with real distinction, the beauty of his cantabile matched by the accuracy of his divisions, impressive chest notes and accomplished ornamentation, including trills . . . [Catone is well essayed by Juan Sancho] with strongly confident singing and a fine technique . . . Especially memorable is his furious dismissal of the Roman legate Fulvio, “Va, ritorno” (act 2), the orchestral contrapuntal chromaticism underpinning a magnificent display of defiance . . . [Arbace is sung by Cencic] with his customary authority and tonal beauty, the pain of the intensely chromatic act 2 aria “Che si a la gelosia” touchingly conveyed by Cencic’s finely poised singing . . . [As Emilia,] Vince Yi’s distinctive — and here at least very feminine sounding — timbre allied to a highly accomplished technique is ideally suited to the role, while her admirer Fulvio is sung with real style by the young German tenor Martin Mitterrutzner . . . [the playing which Minasi draws from his Pomo d’Oro orchestra] maintains throughout an admirable level of fiery dramatic conviction in allegros and Italianate lyricism in andantes . . . this is a highly significant and important release that casts fresh light on Vinci’s standing as one of the major figures in earlier 18th-century opera.
Record Review / Brian Robins, Early Music Review / 01. July 2015

. . . the musical magicians of Il Pomo d’Oro cast enthralling spells in virtually every bar of their parts . . . [Fagioli’s singing] never deviates from the exalted standard set in his performance of the Act One aria “Nell’ardire che il seno t’accende”, in which he makes love in music with delicate trills matched by the strings . . . Cesare’s “Quell’amor che poco accende” in Act Three is as stunningly beautiful as any aria composed in the Eighteenth Century, and Fagioli’s performance of it is worthy of the music, the upper register glowing . . . The aria “È follia se nascondete, fidi amanti, il vostro foco” receives from Sabadus a beguiling performance, and the gossamer strains of “In che t’offende se l’alma spera” in Act Two are eloquently elucidated . . . [Cencic] responds to the whirling string figurations in “È in ogni core diverso amore” with singing of sparkling sensuality. “So che pietà non hai, e pur ti deggio amar” in Act Two is phrased with tremendous imagination . . . it is the Act Three aria “Combattuta da tante vicende” that is the pinnacle of Cencic’s performance. He rockets through the fiendish coloratura with calm aplomb, but it is the sheer loveliness of his voice that refuses to be forgotten. Cencic’s presence on disc in general is exemplary, but his Arbace in this recording of Catone in Utica is the work of an artist with few peers in any Fach . . . Yi tellingly explores the expressive possibilities of music and text. His voicing of “Se sciogliere non vuoi dalle catene il cor” is [fetching] . . . this phenomenal recording of the opera proves that Vinci’s music is by no means undeserving of performance alongside the works of the best of his contemporaries. With “Catone in Utica” joining acclaimed recordings of Händel’s “Alessandro” and Hasse’s “Siroe, re di Persia”, the commitment of Decca and Parnassus Arts Productions to retrieving wonderful music from the shadows of history is thriving.
Record Review / Joseph Newsome, Voix des Arts (Blog) / 21. July 2015

. . . [the cast] is a strong one. Franco Fagioli brings his extravagant gifts to bear as Cesare, eloquently lyrical in expressing his sympathy for Emilia and his love for Marzia, strongly assertive when in military dictator mode. The tenor Juan Sancho is a highly effective adversary, relishing the splendidly varied arias Vinci gave Catone, his excellent technique coping admirably . . . Cencic’s assumption of the part of the weak Arbace is distinguished by a beautifully poised account of “Che sia la gelosia” . . . [Vince Yi’s] distinctive timbre is ideally suited to essaying the role of a woman, his portrayal of the vengeful Emilia both rounded and full-blooded . . . [Riccardo Minasi’s direction is much to be admired for] the combination of fiery Italianate passion and lyrical grace he elicits from Il Pomo d’Oro . . . [this recording] is a major achievement that takes another giant step in the overdue rehabilitation of Vinci as one of the outstanding opera composers of the first half of the 18th century.
Record Review / Brian Robins, Opera (London) / 01. August 2015

All three countertenors are virtuosos, but Fagioli, fittingly for Caesar, takes the laurels. His embellishments, besides astonishing the ear, deepen his characterisation — for instance bringing out the latent narcissism of “Quell’amor che poco accende”. The band contributes enormously throughout, its brash exuberance alternating with continuo realisations as delicate as they are original . . . [a] superb premiere recording.
Record Review / Berta Joncus, BBC Music Magazine (London) / 01. September 2015

The work has dramatic contours and subtleties of expression that give it the requisite verve and variety to keep you on board . . . Riccardo Minasi’s band Il Pomo d’Oro plays superbly, fur and bow-resin flying in Cato’s furious second-act aria, “Dove svenarti allora.” The singing is skilled and consistent . . . The prime mover behind these Vinci revivals seems to be Max Emanuel Cencic, who hands in the most beautiful singing as Arbace . . . Franco Fagioli gives an extroverted performance as a fiery Julius Caesar, vocally unafraid to drop into an aggressive chest voice. The tenors, Juan Sancho as a scene-stealing Cato, and Martin Mitterrutzner as Fulvio, are the equal of their treble counterparts and as dramatically engaged as their music allows . . .
Record Review / Tim Pfaff, Bay Area Reporter (San Francisco) / 10. December 2015

As Fulvio, tenor Martin Mitterrutzner displays an easy strength in his singing, but musters heroic force for the runs and leaps of “La fronda, che circonda.” Juan Sancho, in the title role, is reason enough to buy the CD . . . His singing is filled with imagination and variety, with heroic command for his first aria, “Con si bel nome,” whose trumpets and measured tempo suggest stately majesty, but whose triple meter hints at noble elegance. Sancho navigates the runs of “Si sgomenti alle sue pene” and brings bite to the angry, agitated “Dovea svenarti.” After a superb quartet for Cesare and Marzia against the vengeful Catone and Emilia, the opera ends with the onstage suicide of Catone, in masterful and touching accompanied recitative. Il Pomo d’Oro, under the direction of Riccardo Minasi, provides colorful, energetic instrumental support.
Record Review / Judith Malafronte, Opera News (New York) / 01. January 2016

Decca has some of the best counter-tenors on its books at the moment . . . Here those talents are laser-focused on this single work to great advantage . . . The super-virtuosic Franco Fagioli assumes the role of Caesar and his crystalline purity is, predictably, one of the set’s greatest assets. That said, he shines as much in slow arias, where his legato is excellent, as in faster more imperious ones . . . [Cencic]: one often finds him singing somewhat lower in his register than in other recordings. This brings out different colours in his voice and is testimony to his range and his tone colours — try Act II’s “Che sia la gelosia”.
Record Review / Jonathan Woolf, MusicWeb International (Coventry) / 01. April 2016

Catone in Utica (1728) was written in Rome for four stars: the tenor Panacci (Cato) and the three castratos Carestini, Farfallino and Minelli. Though this all-male casting was dictated by a 1588 Papal decree, the decision to pit a lead tenor against castratos was novel. Librettist Metastasio, then at the start of his career, cleverly used a story about Cato’s defiance of Caesar, and Caesar’s love of Cato’s daughter, to give composer Leonardo Vinci rich opportunities for heroic show. This new recording showcases today’s top countertenors: Franco Fagioli (Caesar), Valer Sabadus (Marzia, Cato’s daughter) and Max Emanuel Cencic (Arbace, Caesar’s rival). With Vinci’s score effectively setting performers in competition with each other through alternating arias, director Riccardo Minaso heats up this sense of rivalry – the variations get wilder, the yearning more palpable. All three countertenors are virtuosos, but Fagioli, fittingly for Caesar, takes the laurels. His embellishments, besides astonishing the ear, deepen his characterisation – for instance bringing out the latent narcissism of ‘Quell’amor che poco accende’. The band contributes enormously throughout, its brash exuberance alternating with continuo realisations as delicate as they are original.
Although dramatically convincing, tenor Juan Sancho as Cato strains some top notes and belabours the more fiendish diminutions. Indeed, clocking in at almost four hours, Catone in Uticarequires stamina all round. Patience is however rewarded by this largely superb premiere recording.
Berta Joncus – BBC Music Magazine